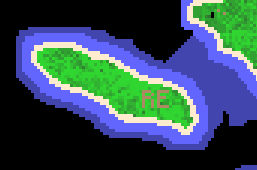 Shark Island, roughly centered at [-70.568,+26.416], is the name the Royal Expedition gives to the largest of the three land masses off the west coast of Shartak. In their view, the two smaller land masses should be called islets, since they measure barely a dozen units at their widest, and the largest should be called an island, since it is considerably larger than the others, being over fifty units long and almost twenty wide.

While fruit trees and bushes are absent from the island, smaller banana and mango plants provide some fruit and demonstrate that it could be cultivated in the future.

The first known visit to the island was made by Morgan Freelance on 26 February 2006.[1] He had suspected its existence after noticing that the map in the Shartak logo appeared to contain an outline of a land mass behind the "S" in "Shartak". On 22 February he announced his educated guess to other members of the RE and set out. He reached the island four days later, claiming it in the name of Her Royal Highness.

A second expedition was mounted, led by the formidable Grigoriy, which mapped much of the island and opened its interior for later adventurers and explorers.

It was with some surprise that they returned to discover that, in their absence, their findings had been appropriated by members of the Discordian Cargo Cult. The DCC had violated the spirit of discovery by referring to the island as "La Islet Bonobo" and claiming it as their own.

Morgan Freelance vowed to return and by 13 April had blazed the letters "RE" into the jungle of the island, sufficient to be visible from the sky. His efforts were resisted by guerilla activity from DCC members, one of whom was slain in the ensuing skirmish. Morgan himself died shortly thereafter in a brutal retaliatory killing which has sparked a conflict between members of both the DCC and the RE. Both groups have agreed that fights over the territory may only occur on the disputed territory, not on the mainland.

A freelance group containing sevral Outsiders,Pirates and 1 Native Have decided to blaze a highway to the Island. It is currently under construction now, and Full Details will be added upon its Construction. We will attempt to add it to the Map Project--BLooDCLotT 01:23, 27 August 2007 (UTC)