Sacred Space is a special area located on the summit of Mt. Shartak, accessed through portals scattered across the island.

Following months of escalating violence on the island throughout late 2008 to January 2009, the spirits of the ancestors revealed the location of their sacrosanct grove for all of the island's inhabitants who sought refuge from the mainland carnage. The inception of Sacred Space was a controversial move, with some players believing it to undermine the risk-based nature of the game.

In March 2012, Sacred Space was reopened, a motivation being the goal of gaining the infraterritorially limited Faith skill. There were some modifications, particularly the enabling of combat throughout its entire perimeter. 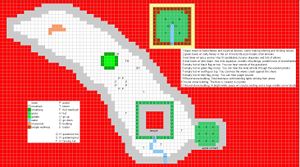 From the official Shartak newsletter on January 27, 2009:

27 January, 2009 - The spirits of the ancestors reveal their temple

• The spirits of the ancestors have seen how badly violence is affecting the island. Their descendants fight themselves, as well as the outsider menace, causing island-wide chaos. They have decided to reveal the way to their ancient temple location and offer a safe haven for those who wish to flee the conflict.
• The sacred space will not allow violent souls to enter or leave without paying a price and the ancestors will protect all those who reside there.

Inside the Temple of the Ancestors

Temple of the Ancestors

The sacred temple reachable only by climbing the temple walkways in Sacred Space. Consists of a stream of fresh water, songbirds, four staircases, several unique huts and buildings, and a roaming trader by the name of Tamdal. 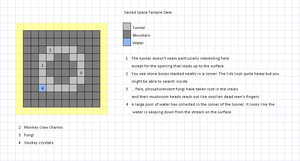 Try not to get lost in this extremely complex labyrinth

The catacomb is an underground circular cavern located under the Sacred Temple and consists of tunnels, a pool of water, a fungi vein, other subterranean sights and terrors. As of February 10, 2009, players were able to engage in PvP combat in this location.

The gateways are mystical blue arches located in each of the eight camps that transported a player into the gateway juncture inside the Sacred Space. When entering a gateway, AP penalties were incurred on the player depending how violent they are i.e. a peaceful player is not penalized at all for entering a gateway. When leaving a gateway from Sacred Space, if you had recently committed an act of violence (not including to animals), the following message was displayed:

You close your eyes and step through the archway, your thoughts focusing on where you came from. The spirits of the ancestors are angered by your recent violence and as you are returned to your point of origin, a bolt of lightning appears from nowhere and strikes you. You die.

Gateways with their respective camps and locations are listed as following: