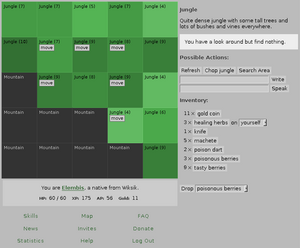 Elembis searching by the mountain on 23 May 2006

Elembis made his first edit here on 18 May 2006. In the game, he plays a warrior from Wiksik.

He has created the Shartak Underworld, an alternate CSS style for the game, and some Greasemonkey scripts, and he has a sandbox.

He played Jail Riot as Elembis and Urban Dead as Amminadab until the depth of Shartak captured all of his interest from those two games.

As of 20:37, 2 September 2006 (UTC), Elembis has died 14 times and killed 26 outsiders. As a member of Open Arms, he is peaceful to everyone but may use force against players who are proven dangers to the peace and safety of others on the island.

In chronological order, the outsiders who have been freed of their bodies by his blade are Jonathan Hopkins, Celia Lede, Gryphon, Dark Fury, Sardonica, Arwedda, sayt, MickR, and others. He's lost track of the players he's spared.

Elembis can be contacted in real life via: