The Founding of the 1st Colonial Militia

The 1st Colonial Militia was founded after the Third Invasion of York. Many of the highly ranked Militiamen fought in the defense of York against an alliance of Mercenaries and Pirates. After the many skirmishes were over little had changed. York was safe from cutthroats but like Derby and Durham, not safe from the taint of the savages. Derby and Durham refused to exclude natives and pirates from their settlements.

A Declaration of Independence was voiced; it was time for the Colonials of Shartak to defend themselves from the hostile natives and their wicked agendas. The need for people to stand up and be counted and serve their new town was paramount. Thus the 1st Colonial Militia was born. Made up of those fighting men who bravely volunteered to fight for the freedom of a new York and defend others with their own lives, the 1st is made up of people from every walk of life; from soldiers to scientists.

The Colonial Militia is always looking for more brave men and women to join their ranks. 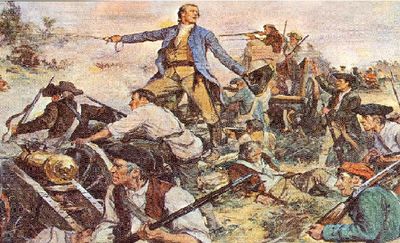 Defenders of York manning the barricades.

We need heroes like YOU! : Join the 1st Colonial Militia and save Shartak. Young people from all over Shartak are joining up to fight for the future.

Everyone is doing their part. Are you? The 1st Colonial Militia welcomes all outsiders without an extensive history of outsider Pking. Any level and any class.

Post in our Forum topic or PM Serious Sam on the Official Forum.

Members of the 1st Colonial Militia hold the line.

Carve, draw and print these wherever you please. Please respect other group headquarters.

Following a series of precision strikes Wicksik invaders have been cleared from the Grasslands and Swamps around the River Hazen. Over the past two days Militamen Mad Dok, Gunshow and John Rambo have killed 7 of the savage invaders. Serious Sam has arrived on Midway and cleared the island of Two Invaders.

It is with pride that the Militia is the first to defend the Sovereign lands of York from the invaders.

Peace talks with Eastern Federation Leadership have broken down. Yesterday EF members attacked Commissar Alexander unprovoked. Serious Sam has stated that until an apology is issued by the EF all EF members will be Kill on Sight in the lands of York. It is with the deepest regret that Commander Sam has enforced this order. However, the CM will not allow the EF to harm it's service men without response.

After a bloody and well fought victory in Creedy the Militia are now conducting peacekeeping operations in the Yorktown and surrounding Peninsula. Already the purge of the hostile savages and pirates has begun. The Colonial Militia has also been instrumental in fighting the Bill plague of York.

Commissar Alexander has begun investigations into Derby to weed out and cleanse the taint of the savage and the plague of the pirate. He is joined by Confessor Lines and the living saint Randall Flagg. The true patriots of Derby are most grateful for the Grey Ghost and his skills.

Following differences with the Coalition, the dissolution of the council and a concern that the Coalition was not fulfilling the intended role that the Captain foresaw the CM has left the Coalition to pursue the defense of York independant of the central YC command.

Following some impressive work in the York cup with the York Coalition the Colonial Militia has pledged it's full support to the new union of Pro-York groups. The Militia is ordered to muster in Yorktown for the defense of York against a pirate raid in Early June.

The Militia has agreed to plans to join the new York Coalition. All Militiamen are reminded to muster in York to help in it's defense.

Following the victory for the defenders of York and the foiled attempts on the Shaman by Colonial Militia troops, we have now left York. With a secure perimeter established and York safe from any sizeable threat all troops are ordered to move out and contact officers ASAP regarding new objectives. The best way to do this is to PM an officer on the official forum.

The Colonial Militia would like to thank the Colonial Police for it's hospitality and particularly their Captain for his everlasting friendship and support. The CM will be back for the 'York Cup'. Area of Operations are classified as of present.

In other news the announcement of Elections has been a great victory for the Pro-Outisder cause in Durham. The Colonial Militia looks forward to working with Governor Nathan Hale once the election is won.

Colonial troops have been active in the fourth Invasion of York. The MG are now broken and it is only a matter of time before the 1st Imperial Privateers and JRG are routed. The Captain commends the bravery and efficiency of his men. A small contingent of Colonial Troops commanded by Sgt Richard Quinton have been deployed into Derby to aid in the defense of Derby against the headhunter threat. This marks the start of Operation 'Lending Hand'.

Welcome to our new Field Surgeon Derry! May he enjoy his time serving the greater good.

All militia men from february onwards will receive pay for their service to the greater good. Details on exact payments to be posted soon.

--Welcome to our new members Zhou and Richard. The Captain welcomes these heroes and looks forward to working with them in the future.

--A new KOS list/Criminal List is now on the discussion page.