Welcome to the Shartak Wiki!

In case you've missed it, the 'Show preview' button allows you to preview your changes before you save - allowing you to make a number of minor changes in a single 'save page', which would be appreciated.

Neil, there's a template for deletion suggestions - Template:Delete - if there are pages you think aren't needed, just add the template to those pages. --Johan Crichton 19:39, 10 March 2010 (UTC) 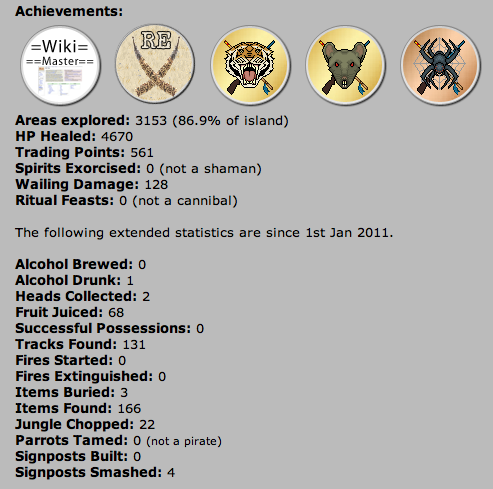 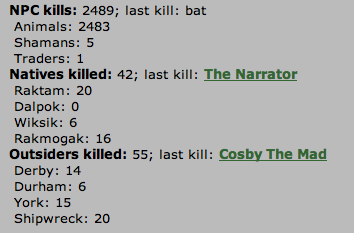 So you've revised my changes. As a newcomer to Shartak coming over from other games, I changed that part of the wiki as the start of a slow change to the whole thing. I respect that the fiction is older than my time here, which is why I didn't simply wipe it out, but having character names in it makes the whole game look full of themselves from a new arrival's perspective. As I don't wish to see the whole game sunk due to this (I had encouragement to try it despite that rather poor first impression) I sought to repair it to that the names in the fiction are more generic and accurately describe the skill (I've seen a handful which don't actually match the skill's effect).

Thank you for explaining why you did what you did. Most people wouldn't have bothered and tried to have an edit war. The reason why I had placed names in there was a nod to older characters of the game, and give them some respect for what they had brought. I never saw it as a putdown for newer players, and in fact I've had some new players say they enjoyed that aspect quite a bit. Several people have told me how they were excited that they found these actual characters in game. Which makes me curious as to why you think it makes us look full of ourselves for doing that? Seeing as I spent alot of time on those skill pages, I found it kinda insulting that you went in and changed it like that without discussing it first with me.

The last thing I would want to do is to deter new players, but I honestly don't see how having names in a sentence or two is deterrent in any way, shape or form. Now is skill specs are wrong, which some of them have been, I have no problem with people correcting that, or even their own clan pages. I don't mess with those, only clean them up if the clan is old and has some formatting issues in their page.

We could pose this question to the community as a whole and see what they say on the forum. If a majority of people think it's a deterrent, then we can easily edit them.

I'm also curious to these other changes you say you want to implement, and how they will change the wiki on a whole.

Well, thank you for replying nicely. In hindsight, what I did WAS rather rude and you'd have been justified in not wishing to speak with me. Offending you was NOT at all my intent. I simply am trying to help and may have done so the wrong way. I forget sometimes that I'm not as known on this wiki as on others. And I am aware of the pointlessness of a edit war. Aside from wasting both our time, it is the mark of a wikinoob to try edit-war with an older user. I'd rather not have my name marred with such a title. It's impossible to remove. Aside from that, I've come from another game where the use of player names in skillfiction was forbidden. It was because many people were doing it purely so they keep their "mark" on the game forever and, in some cases, writing up total bullshit and only keeping it because they gathered their clan and ordered them to vote for it. I will watch the link you provided me and if the game as a whole REALLY thinks that the pros outweigh the cons, then I will respect it, no matter what my own attitude towards that is. Perhaps I am simply jaded.

Now, regarding my changes they are a long-term plan, since it seems that working alone will take me a while to do this, the first is going to be my own hunting of the grammar and spelling errors which seem rampent upon the wiki. I've seen them in both skill descriptions, in clan pages (this one I'll have to request permission before stepping in. I've already obtained permission from the Necromancers guild, so I'll begin there), in fiction (mainly grammar there, but occational simple mistakes such as "their" and "there" being mixed up) and in the guides.

The next phase would be changing things to further aid the new readers. The KISS theory needs to be implemented a little here. The newcomer's guide(s) made NO SENSE to me when I first read them until I had an hour-long conversation with an older player (who'd told me and invited me to shartak) over IRC. And still I had to go and actively experiment, a week-long trek through the game's manu tiles, before I fully understood how things in the game worked. Aside from that, I would, if permittable, replace some fiction with ones which accurately describe the skill rather than simply fiction which, while sounding good, does not actually show what the skill does. (Maleviolence is one example of this. When I read it, I first thought the skill gave the user the ability to harm SPIRITS, not cause them to harm the living. Then I read the skill two more times and looked it up on the necromancer's guide before figuring it out). If you're willing to work with me on that, I'll say now that when writing game-fiction, I always use generic names. As above, if the community prefers to use character names, then you'll have to place names into the fiction (since, as a newcomer, I don't know who would fit best).

I'll continue to explain my objectives as things are ticked off, since this stuff, although only a paragraph thus far, is already quite enough. Shadok 00:47, 21 July 2011 (UTC)

I am extremely guilty of grammar and spelling mistakes. It's one of my weaknesses. I'm am more than happy if you are willing to go through the wiki and correct these mistakes. I agree with you about the newcomer's guide, I've never like it myself. If you can think of a better way for it to present itself, be my guest. My strength in the wiki s relating past events.

If you want to replace fiction, that is fine, just use the names already in the text. Shouldn't be too hard to do, but if you wish, I can always insert the names into the text easily enough.

Also, how do you sign your posts? I never got the hang the it.

Well, we are all with our flaws. I know quite a few of my own and will seek out aid from others when I need it. It's good to know them.

Well, I will certainly come to you if I require information about Shartak's past. I won't pretend I know much about what has happened in Shartak in the past. It's good to know I have someone I can turn to on that matter.

As for fiction, I'll try to do that. It's just a simple matter of substitution. I'll just need to remember to put the names in.

I as just creeping through recent changes. I'm decently good with coding and can help in that aspect. you can message me on my talk page for help or if its important/urgent hit up my wiki page on Urban Dead. here.--Mazu-T-C1-C2 20:13, 22 July 2011 (UTC)