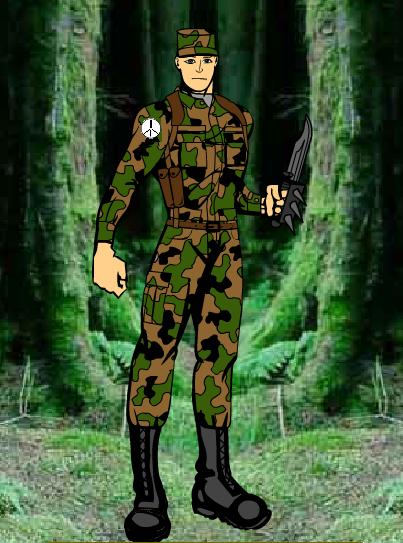 SGM Mark D. Stroyer (Ret.) is a Derbian, the founder of the Derby Rangers, the Eastern Federation's paramilitary group. An explorer, he extremely enjoys his ability to easily travel through jungle most people avoid. When not out leading a Ranger operation, he can usually be found in the Rangers' HQ, although may be gone hunting for a few days at a time.

An ex-Army Sergeant Major, he was in scouting and reconnaissance for seven years, among various other occupations. In his years in service, he also learned to be proficient in patching up wounded soldiers. After retiring, he came here for an adventure. An adventure may be an understatement.

He has a machete in scabbard across his back, for maneuverability. The handle is above his left shoulder. At his right hip is a knife. He also has a bag on the rear left side of his belt, typically filled with dressings. On his right shoulder is a Derby Rangers patch. He currently leads the Derby Rangers, the Eastern Federation's paramilitary group.

Mark is generally cheerful, frequently joking around. However, during times when action is needed, he can quickly become deadly serious. He always watches his allies closely, making sure they're in no more danger than he is. He's devoted to the safety of Derby, and even in peacetime can be often found patrolling the jungles around the town, usually hunting animals as he does. He has done a lot of killing in his time, and will do it without hesitation, given proper reason.

In many games, I'm Mark D. Stroyer. You may know me from Urban Dead, as I'm a survivor. There I'm the highest level possible, except for the burdening Brain Rot. Urban Dead is what brought me here.